To identify exactly what information a sign or a notice contains, and use the information to correctly choose between three options, while not allowing confusing information to affect your decision.

Look carefully at the notice to identify the kind of notice it is and what information it is giving. 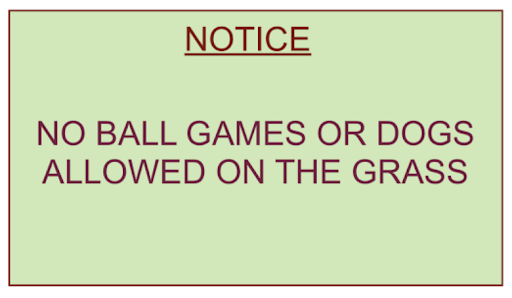 The first notice says that an activity - ball games or playing with dogs, is not allowed, which means you can't do something here. Here means the grass.

We are then given three sentences.

Look at the three sentences, of which 2 are incorrect and one is correct. It is usually easier to find the incorrect sentences.

A) This is a good place to play ball with your dog.

This is incorrect, because if an activity is not allowed, it is not a good place.

B) This is a good place to walk the dog, but without the ball.

This is also incorrect because again it mentions it is a good place, which it can't be.

So the last sentence must be the correct one.

C) You can't go here with your dog.

It uses the words can't go, which matches not allowed, so it must be the correct answer.

Let's look at the second notice: 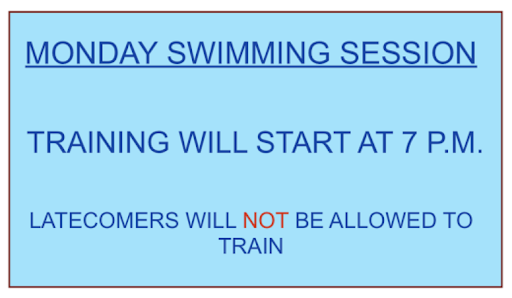 This notice gives information and a warning. It talks about late comers. It uses the words NOT ALLOWED, so you must be on time for an activity.

The three sentences we are given include 2 that are incorrect and one correct one:

A) You should try to be on time, but a little late is not a problem.

A says a little late is not a problem, which does not match with NOT ALLOWED, so this sentence is wrong.

B) Training has been delayed.

This says there has been a delay, but the notice does not mention a delay, so this must also be wrong. The final sentence must then be the correct one.

C) You must be on time if you want to train.

MUST BE on time means can't be late, and this matches the information in the notice, so it must be the correct answer. 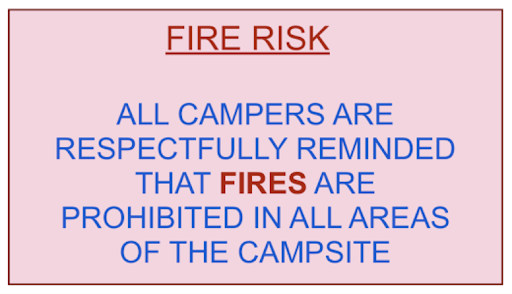 This notice says that fires are PROHIBITED, which means not allowed. Words like this are very common in these kinds of notices, and students need to become familiar with them.

The notice also says fires are prohibited in ALL AREAS OF THE CAMPSITE, or everywhere.

Let's look at the three sentences we are given:

The first one says

A) A little fire is acceptable if you take precautions.

Which is not what the notice says, so is wrong.

B) You cannot have any kind of fire here.

Which agrees with what the notice says, so it could be the correct answer.

C) Be careful there is a risk of fires.

Which is not what the notice says, so this sentence is incorrect.

The only correct answer then is the second sentence.

Let's look at the next notice: 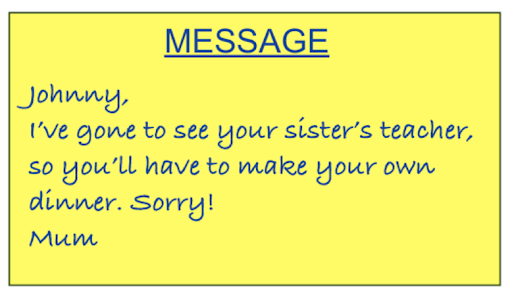 this notice is a message from mum to Johnny, and the message is that he will have to cook his own food because mum has gone to see his sister's teacher.

Let's look at the sentences:

A) Mum has gone to see a teacher.

This agrees with the notice so it could be the correct answer.

Let's look at the second sentence:

This says that mum wants to see a teacher, and is not correct.

The third sentence says that mum has spoken to Johnny's teacher, which is not correct, so the only possible correct answer is the first sentence.

Let's look at the final notice: 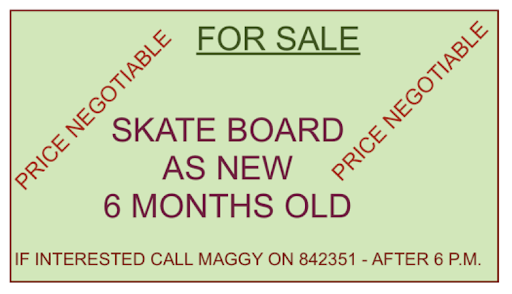 This notice uses the words FOR SALE, so someone is selling something, which in this case is a skateboard. The notice also says the skateboard is 6 months old.

Let's look at the sentences:

The first sentence says the skateboard being sold is new, which is not correct.

A) Maggy wants to sell a new skateboard.

The second sentence says that someone wants to borrow a skateboard, which is also not correct.

B) Maggy wants to borrow a skateboard.

The final sentence then must be the correct one, and it says that someone wants to sell a skateboard which is not new, which is correct.

C) Maggy wants to sell a skateboard which isn't new.

So, these sentences are easier to check if you start by looking for which ones are wrong, and then looking at the one that's left, which should be the correct one.