You are given an image, some text, and some sentences with some spaces. Use the information from the text to find the correct word for each space and type it in the space.

When you finish the exercise, click the check button at the bottom.

Your final mark will then be given as a percentage.

The first space is given as an example.

You need to be able to do this exercise in about 10 minutes and a timer is provided.

There is no pass or fail result for YLE exams. 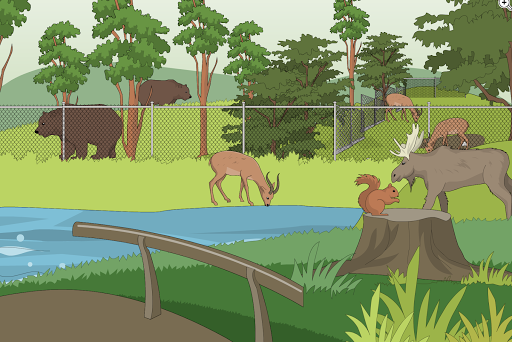 "Hi, I'm Fred, and it was my sister Sally's birthday, so we were all sitting around wondering what to do to celebrate.

Suddenly the door bell rang and my cousins came in. They had decided to visit us for Sally's birthday, and we all decided to go to the zoo for the day.

We got dressed really quickly and we were off.

First we went to see the monkeys, who were great fun. Jim, my cousin, had a banana, so he gave it to one of the monkeys, and got told off for feeding the animals, which isn't allowed.

Then we went to see the tigers, which are my favourites. I think they are really elegant, the way they walk, and you can see that they could be very dangerous if they escaped.

After lunch we went to the bird section where an eagle trainer showed us his eagles feeding. It was spectacular. As we came out of that area, we had our photos taken with some parrots, and one of them bit Sally's finger.

She wasn't hurt, but she did get a bit of a fright. We couldn't stop laughing about it for a long time. Even Sally saw the funny side eventually.

We told her it was an extra birthday present."

3 Fred loves seeing the (3) more than other animals.

Your score is /, which represents % of correct answers.